Feeling especially overwhelmed this week (hence the dearth of new posts), I was just given the gift of a couple of free hours. I tried to schedule a last-minute class on ClassPass, but that is proving harder as more and more people join ClassPass. I’m convinced that there are people who sit by their computers everyday at noon just to book a coveted spot at Exceed or Barry’s. 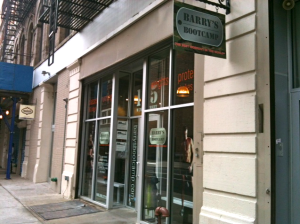 And speaking of Barry, even though I think of him as a boyfriend who tosses my heart around, I can’t give him up. I took a class at Barry’s Bootcamp Chelsea on Monday. I was still often totally unsure whether or not I was doing the floor work correctly, and frankly, didn’t feel like I was fit enough to enter the room. I sheepishly watched girls who were cut like boxers change into high-fashion workout wear in the locker room while asking each other if they were staying for the next class too. Two classes in a row? But then I hit a new high speed on the treadmill. 8.0! Yes! I felt like a speed demon until I saw the girl next to me reach 11.2. It’s like one of those unhealthy relationships with a super-hot narcissist who’s really good in bed. Oh Barry, I want to impress you, to feel the pain and the rush I get from being near you, yet I probably deserve a little better.

I don’t mean to diss Barry’s, but it does bother me that the instructors have so many students to watch at once, and that some of the people at the front desk are rude in that I-don’t-need-you-as-much-as-you-need-me kind of way. In fact, I left my FitBit in the shower after class, and when I called to ask if they could hold it for me, the guy who answered the phone completely brushed me off saying I’d have to come in and check with the maintenance crew. Dreading a cab ride back downtown to Barry’s after work, I called again and a young woman with a soul answered. She found my FitBit and held it for me at the front desk.

When I went to retrieve my FitBit, I felt the pull to get back in that room and be able to lift that next level of weights and reach the numbers on the treadmill that the instructor will shout at me. I cannot stop seeing Barry. Much better boyfriend material though, would be BFX.

Yesterday I took the BFX Burn class with Derek, and is was an equally challenging workout. But I got attention to my form by not one, but two instructors. I even felt a bit pampered. The plush new mats, the spotless new-ness of everything from the floors to the coat rack, and the sticky sweet smiles of every employee. I should totally like them better than Barry’s. They were nicer to me, their locker rooms allow me to open the door without hitting someone else, and they’re so high tech. I do, I like them. But is it possible for a studio to be too perfect?

ClassPass really is like dating. I’m starting to get that feeling that settling down instead of playing the field would be nice, but I’m not sure I’ve found the perfect place yet. The place that gets to know me, supports me, but also gives me space to lay low and not feel self-conscious. For now, I’ll keep fishing around.

On that note, just got an e-mail from ClassPass that members can now use Crunch Gym and go to their classes! Woot! Tomorrow I’m giving FlyBarre a second date. Despite all the raves (even from those super fit double-day class go-ers) I’m not sold on the Barre idea yet. But everyone deserves a second chance.