I thought today would be a run-of-the -mill, stretch-out-my-sore-muscles Yoga day, always needed after an EVF 360 class (which I took on Monday and am still feeling 2 days later!). I’d never been to Yoga Vida before, but it’s near the school where I teach Lego Robotics so I figured I’d give it a try.

As I set up my mat ($2 rental) and looked around, I noticed the usual yoga crowd: 90% female, slim and trim up front (by the way, for more on the whole front row crowd, here’s an interesting NY Times article), pregnant yogi in the back along with those of us who need lots of blocks and blankets to stay comfy in our poses. However, this class also had several preening pre-class stretch-ers already down like dogs, one of whom had on a long-sleeved, bare-midriff top. (This is an item of clothing that really makes no functional sense as you’d never find yourself in a situation in which your arms were cold, but your belly wasn’t. But hot she looked.) And just as I was wondering why this class seemed unusually heavy on the lipgloss-wearing showboat types, in walked our instructor. 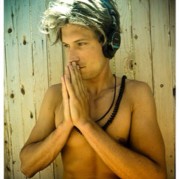 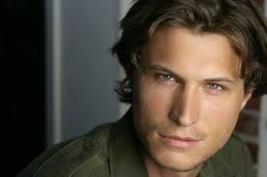 His name is Zander (“with a Z”) Gladish. In addition to being a heartthrob yoga instructor, he’s an actor, a board certified Heath and Wellness coach, and an EFT or “emotional freedom technique” specialist (sounds liberating). He does Reiki and Thai massage too. You can even find his workouts on an on-line workout platform called Booya Fitness (looks like an interesting way to squeeze in a fitness class when it’s too cold, rainy, or snowy to make it out of the house this winter.)

The class was fast-paced, and I think it was good, but really it’s hard to say. I was much more interested in catching glimpses of Zander and his interactions with the students whose poses he chose to correct as he circulated the room. I found myself, in a very Bridget Jones-like way, bending deeper into my twist as he walked by. Then, as I looked up at him in hopes of some correcting, I toppled to the ground, and he moved on to the deeply tanned, flat-bellied, Lululemoned Asian girl. I swear he corrected the 6-foot blonde waif two or three times, but he never made it to the three dudes in the back nor to me.

So then I moved on from ogling to amusement making Shavasana pose an impossibility. I mean, it was starting to feel more like an episode of The Bachelor than a yoga class. Could these girls act more like peacocks? After class they loitered. I think I even saw him exchange numbers with one. Me, I scurried out to change. I’d never stoop to fawning over an instructor. But then, as I was putting on my hat and coat, there he was behind the counter, tucking his long strands past his glasses behind his ear. And as another girl passed by gushing at him about how great his class was, I suddenly found myself walking over to him too.

“I really liked the music you played in class. Do you have a list of the songs?”

But, really, I did like the music, I swear.

You can find the playlist on Spotify by searching Zander Gladish by the way.

4 thoughts on “Feeling Like Bridget Jones at Yoga Vida”